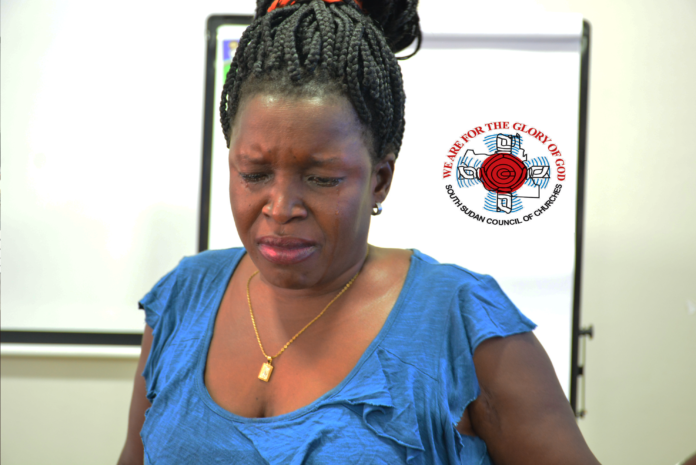 Since the civil war erupted in 2013, millions of South Sudanese have gone through Gender-Based Violence, but often not talked about, aided with Covid 19 were victims, and survivors live with their perpetrators.

Aligned under our advocacy pillar: Action Plan for Peace (APP) under sub-objective “Create a conducive environment for peace, reconciliation and good governance that facilitates community cohesion and restoration” and with a critical message taken from 2 Samuel 13:12, “Don’t my brother…., don’t do this wicked thing”! In partnership with KAIROS, the South Sudan Council of Churches organized a day orientation meeting on counseling and psychosocial support.

The biblical quote from 2 Samuel 13:12 was chosen to create and raise awareness on GBV and encourage churches to speak out against GBV to create a safe space for women, girls, boys, and men to talk about GBV. The one-day community-focused activity aimed at increasing awareness-raising for better S/GBV prevention and response; this orientation meeting brought in female survivors from nine community zones, namely Gumbo, Sherikat, Kator, Nyokuron West, Nyokuron East, Hai El Jebel. Rock City, Gudele One, Lemon Gaba, Gueri Jopari, and 107.

As many GBV survivors remain in constant fear and stigma and are often silenced, the long-lasting psychological effect on survivors has always led to anxiety, depression, low self-esteem and may result in many diseases. Still, God’s word is full of comfort, direction, reassurance, and healing, especially for survivors, mediating on some contextual scripture raised HOPE of survivors.

The one-day orientation training/meeting is an awakening event to engage survivors in identifying risks and concerns about Gender-Based Violence (GBV) in their families and various communities. There was experience sharing narration, exercises basically aimed to create a conducive environment of HEALING and FORGIVENESS. Its main objective was to enable survivors to understand their fundamental rights, knowledgeable on the coping mechanism, resilient and build self-confidence and trust by exemplifying the concepts, causes, effects, and impact of the gender-based violence, sanitizing them on the types of power- theory of change, enable survivors to realize that they can still be actors in their families and community’s despite their violated rights.

This meeting encouraged survivors to build confidence, resilience and strength, autonomy in dealing with the issues surrounding GBV.